Qurbani is the second biggest event in the Muslim calendar, making it Islamic Relief UK’s second-largest fundraising opportunity of the year, after Ramadan.

Islamic Relief is already one of the most trusted, visible charities for its target audience, so our goal was to engage as many brand-aware audiences as possible. We ran a fundraising campaign for the charity in the lead up to, and during, the Islamic month of Dhul Hijjah.

The campaign had a target return on ad spend (ROAS) of 2.0 and our campaign delivered an ROAS 4 times higher, at 8.8 ROAS – an amazing result that IRUK were really happy with.

We set out to achieve an return on ad spend of 2.0. We knew that this was going to be a really competitive time to advertise, so we needed to be smart about our ask and to get the timing right.

Thankfully, Islamic Relief UK had a lot to work with. They have a long history of delivering aid products like food, water and conflict alleviation. 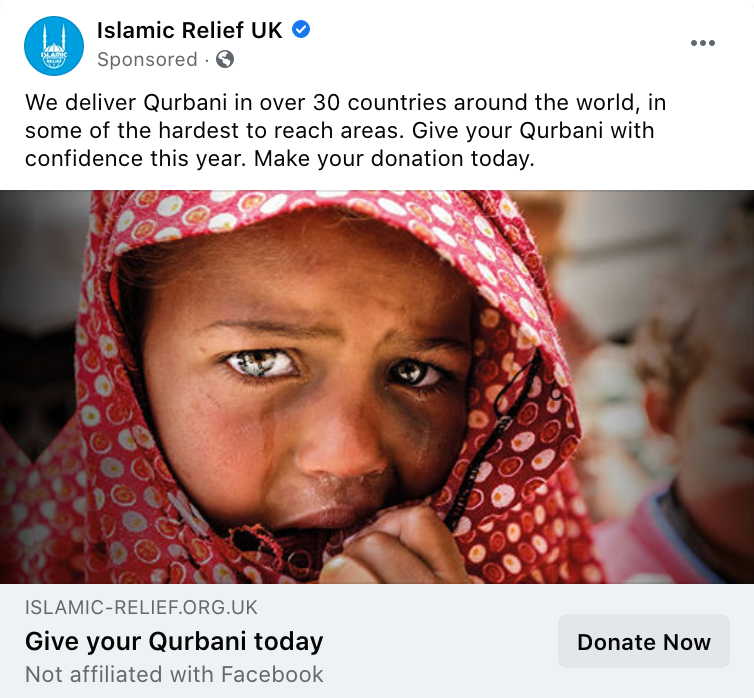 We’ve worked with IRUK for a few years, and we’ve worked on Islamic appeals even longer than that. Our team are experts in giving sentiment around Ramadan and Qurbani, and our deep understanding of Muslim giving means we know why people are motivated to give, how to communicate the work, and how to make it stand out from the sea of ads.

Combined with our knowledge of the giving sector more generally, we were able to give really valuable support in setting up appeal campaigns and pages to ensure the most seamless donation journey possible.

Using our knowledge of previous donors and supporters, as well as our rigorous process of audience and market research, we built groups of audiences around interests that might have a high affinity, but also were easier to compete for.

Then we built sub-campaigns containing ads for different products, featuring images and copy for specific causes. We used messaging that built on the trust Islamic Relief already has in its target audiences, reminding people of the connections they have with their religion, and why IRUK is a great charity to donate to.

Once the ads were live, we monitored them every day. Our deep knowledge of Facebook’s algorithms, media buying and planning theory, and Islamic giving meant that we were able to continue tweaking, expanding the campaign and trying new products until we honed in on the most successful angles and asks.

The campaign was a huge success, and we were successful at raising over four times more than we were projected to achieve.

It benefited our long-term work with IRUK, too. Just as our previous work with them informed this campaign, we were able to take our learnings through to future campaigns to achieve similar results elsewhere, too.

IRUK were delighted with the outcome of this campaign and the valuable funds it raised to support the charity’s lifesaving work.

We went on to build on the success of the campaign by using the most effective audiences in other campaigns we delivered for IRUK throughout 2020.

IRUK were delighted with the outcome of this campaign and the valuable funds it raised to support the charity’s lifesaving work.

Find out How we can help your charity

Fill in the form below, tell us what you’d like to achieve, and we’ll get back in touch to arrange a call to tell you more about how we can help!

Learn more
“I've worked with the Platypus team multiple times. They're the agency we always go back to because of their broad range of skills, consistently great team, good sense and pragmatism and the fact that hey are always a joy to work with."
Lynn RobertsAssistant Director - Digital & Innovation, Action for Children
"We have worked with Platypus on a number of big projects; from understanding what Parkinson’s UK needs from a Digital Fundraising team to developing Data Studio dashboards that our teams can work with on a daily basis. It is great to work with an agency who ‘get us’ and can help us with such a wide variety of digital projects in such a knowledgeable way."
Emily SturdyDigital Supporter Engagement Lead, Parkinson's UK
“In a sometimes confusing and murky digital world, the guys at Platypus are a breath of fresh air. They know their stuff, they tell us it straight and really care about the work we do together. There’s a true sense of partnership between the Sightsavers and Platypus teams, which makes working together more productive and more enjoyable.”
Ella PierceHead of Digital Fundraising, Sightsavers
"Platypus are an awesome agency to work with - their expertise of PPC is fantastic and they have transformed our Google Grants account. Huge thanks to the amazing Nikki for being such a patient and knowledgeable trainer."
Imogen ProctorDigital Marketing Executive, Teenage Cancer Trust
So fab to hear that Platypus are as good as I thought they were. Feedback from the team was that they were a "dream to work with" on our Christmas campaign, "Understand and totally got us." Thanks guys, you've helped a lot of children with cancer with your genius.
Kate LeeCEO, Clic Sargent
Previous
Next