What was the challenge?

Missing People’s mission is for every missing child and adult and every loved one left behind to find help, hope and a safe way to reconnect. Over 100,000 adults go missing in the UK every year. Up to 80% have mental health problems, so the charity provides free guides on managing mental health on their website. The charity wanted to reach new audiences and collect leads for people they could build relationships with and convert into donors to support their work.

What did we do?

We started by providing consultancy to the charity on their landing page content. We advised on the copy, images and structure which would help boost on-page conversion rates. This would lead to more people downloading the guide from all traffic sources. We then planned a Facebook and Instagram Ads campaign which would drive people to download the guide. We mapped out all the audiences who would see the campaign including engaged, interest-based and lookalike audiences. We agreed to run the campaign for four weeks. The campaign was bringing in so many leads that it was extended to six weeks. 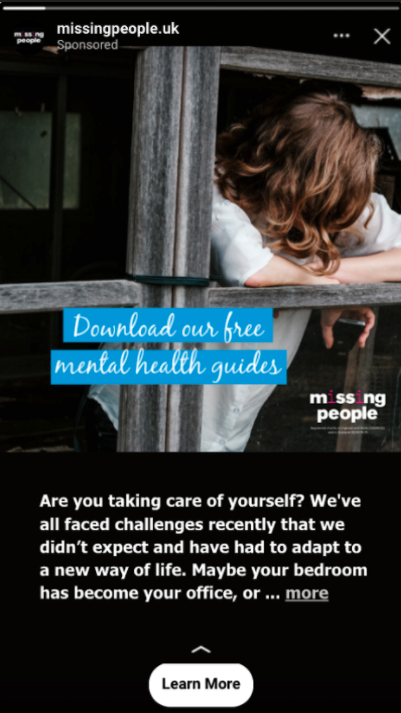 Over 4,000 people downloaded the guides and were made aware of the charity’s mental health resources. They also gave their contact details to Missing People. So these new supporters will now be nurtured by the charity to take campaigning actions, raise awareness of the charity’s work and make donations. Natasha Stephenson, Marketing and Communications Officer at Missing People, said: “We were really happy with how the campaign went; Platypus did an amazing job at helping us achieve the results we needed. “We would recommend them because, throughout the campaign, we received excellent support from the team, and any issues were quickly communicated and resolved. They also went the extra mile and were happy to answer questions and advise on other campaigns or projects outside of this one. We would be delighted to work with them again on a campaign should the opportunity arise!”

Find out how we can help your cause

If you would like to learn more about how we can help your cause or you have a general query, please get in touch using the contact form below and we will get back to you as soon as possible.

“I've worked with the Platypus team multiple times. They're the agency we always go back to because of their broad range of skills, consistently great team, good sense and pragmatism and the fact that hey are always a joy to work with."
Lynn RobertsAssistant Director - Digital & Innovation, Action for Children
"We have worked with Platypus on a number of big projects; from understanding what Parkinson’s UK needs from a Digital Fundraising team to developing Data Studio dashboards that our teams can work with on a daily basis. It is great to work with an agency who ‘get us’ and can help us with such a wide variety of digital projects in such a knowledgeable way."
Emily SturdyDigital Supporter Engagement Lead, Parkinson's UK
“In a sometimes confusing and murky digital world, the guys at Platypus are a breath of fresh air. They know their stuff, they tell us it straight and really care about the work we do together. There’s a true sense of partnership between the Sightsavers and Platypus teams, which makes working together more productive and more enjoyable.”
Ella PierceHead of Digital Fundraising, Sightsavers
"Platypus are an awesome agency to work with - their expertise of PPC is fantastic and they have transformed our Google Grants account. Huge thanks to the amazing Nikki for being such a patient and knowledgeable trainer."
Imogen ProctorDigital Marketing Executive, Teenage Cancer Trust
So fab to hear that Platypus are as good as I thought they were. Feedback from the team was that they were a "dream to work with" on our Christmas campaign, "Understand and totally got us." Thanks guys, you've helped a lot of children with cancer with your genius.
Kate LeeCEO, Clic Sargent
Previous
Next